In 1372, John of Gaunt, Duke of Lancaster became the owner of the Manor of Aylsham. He was the 4th son of King Edward III and he inherited the manor from his grandmother Queen Isobel. He was already very wealthy with the estates of the Duchy of Lancaster and was able to provide money to the villagers of Aylsham for the building of a large new church. The church was dedicated to St. Michael and All Angels and it was built on the site of an earlier much smaller church. 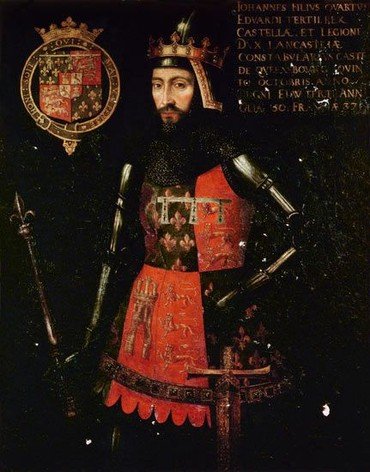 The Nave consists of six bays of alternate circular and octagonal pillars in the Decorated style c.1380 supporting double chamfered arches with small labels at their springing, and terminating on the west in a finely proportioned tower arch. The roof timbers are supported on wall posts between the clerestory windows and grotesque heads can be seen on the corbels. 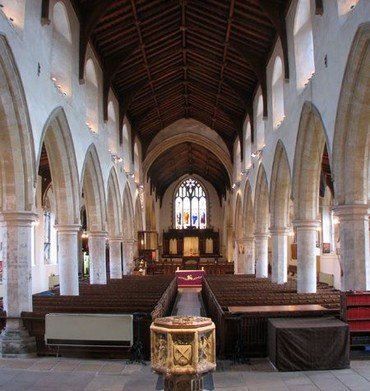 The Tower is built in the late Decorated and early Perpendicular style in five stages. It contains a spiral staircase built into the southwest corner, which climbs to the bells and clock chamber. The floor of the ringing chamber is not built into the tower but is supported by a wooden gallery standing on the floor of the church. It was probably built at the same time as the tower. 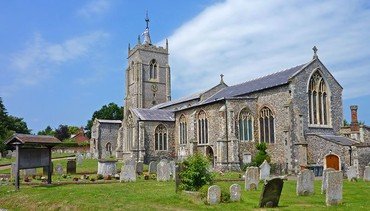 By 1450 the North and South Transepts and the North and South Aisles had been added.
The North Transept was the Guild Chapel of St. Peter. It is quite plain except for a squint in the east wall, which was sighted on the high altar, though this view is now blocked by the organ. There is a tradition that, in mediaeval times, this transept was walled off and reserved for the use of lepers, but there appears to be no structural evidence for this. There are a number of faces included in the roof bosses.
The South Transept was dedicated to the Virgin Mary and is known as the Lady Chapel. It was refurbished at the expense of Thomas Alleyn (senior of Lyng) in 1489 and includes a piscina with Tudor Roses in the spandrels.

The North and South Aisles were built slightly later than the nave, particularly the South Aisle where the windows, (except the most easterly which is Decorated) are in the Perpendicular style. The aisle roofs have plain circular bosses and fretted spandrels. White flints, knapped and squared, give the external south wall a bright appearance.

The Chancel probably dates from the early part of the 15th century and includes aisles and sanctuary. It consists of two bays of clustered columns supporting arches in the early Perpendicular style, with both aisles and sanctuary being very lofty and spacious. The chancel arch is not supported on columns but arises from corbels high up on the wall carved with angels holding scrolls. The south aisle of the chancel was formerly the chapel of the guild of St. Thomas. A rood screen separated the nave from the Chancel and the stairs cut into the wall at the east of the nave led up into the rood loft which was originally situated above the screen.

The South Porch was added in 1488 at the bequest of Richard Howard, an Aylsham man who became Sheriff of Norwich. His initials (one on either side) can be seen above the inner door, and he has a brass inside the church. Outside, the vacant niche was for St. Michael, flanked by windows for the room above the porch. The three shields set amidst flushwork are 1) a cross fleure, 2) the arms of England and France quartered, and 3) St George's Cross. The chamber above the porch was probably intended as a study for the priest or to hold the church plate but it is now empty.
The carved octagonal font dates from the fifteenth century. Its panels are well preserved because they were plastered over previously but are now much restored. They are carved with the instruments of the passion alternating with the symbols of the four Evangelists. 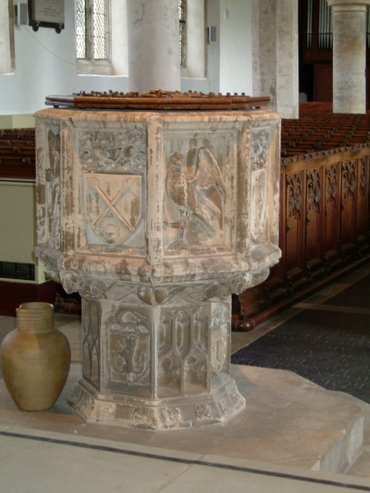 The rood screen was freshly gilded and painted in the early 16th Century. It was badly damaged by puritan reformers but the sixteen painted figures can still be seen. Numbering from left to right, 1 - 4 and 11 - 16 are painted on vellum and then stuck on the wood, whereas 5 - 10 are painted directly onto the wood. It appears from the inscription that Thomas Wymer gave the figures painted on vellum and John Jannys the rest in 1507. Carvings, above the figures, include one of St Michael and the dragon. 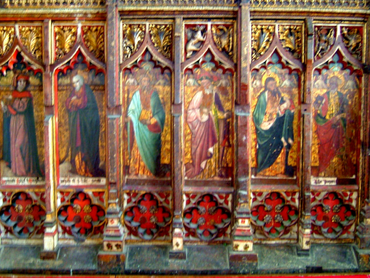 The pulpit can be dated to 1637 when the walls of the church were cladded with oak panelling. An elaborate canopy over the font was erected in the 17th century, but this disappeared about 1850.
In 1684 six bells were mentioned in the records.

In 1700 the ring was increased to eight bells, the last two bells being added between 1747 and 1753 to make the current peal of ten bells. The four smallest bells were recast in 1775.
By this time the great West door had been blocked off with a timber and plaster partition. Galleries had been erected in the aisles at the West end of the church and in the Chancel. The whole of the Nave was filled with high box pews and the font, pulpit and reading desk were not in their present position. In the 18th century the organ was in a gallery at the West end of the church which also accommodated the choir. 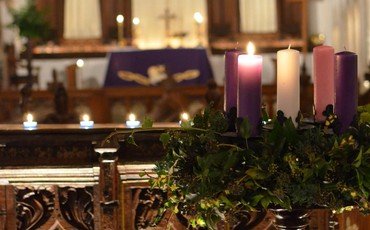 Great changes were made to the church during this period, largely as a result of the work of the Rev. Edmund Yates. A new chancel door was introduced, the galleries were removed and the high "box" pews were replaced with the current pews. These are carved and most are complete with doors. They originally filled the whole nave, the transepts and the chancel aisles, allowing 760 persons to be seated comfortably, with room for kneeling. Only the central nave area currently holds these pews.
The choir stalls in the chancel have carvings on the arm rests and at each corner. One shows pelicans feeding their young in a nest with blood from their breast.
The brass eagle lectern was bought to commemorate the Diamond Jubilee of Queen Victoria. 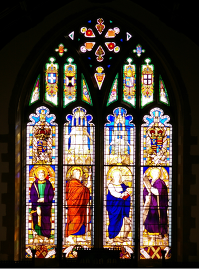 The east window was glazed in 1844 and shows SS Peter, James, John and Andrew. The oldest windows in the church are in the Lady Chapel dating back to 1320 and 1516 in the South Sanctuary. Other major windows include one showing the Holy Family, the large 'Serpent' window, John the Baptist complete with hair shirt, and Christ with the Children which was added in 1837 in memory of Humphrey Repton.
Humphry Repton, the nationally known landscape gardener, chose to be buried in Aylsham churchyard and the grave can be found outside the Chancel door. Examples of his work can be found locally at Sheringham Hall and Felbrigg Hall. 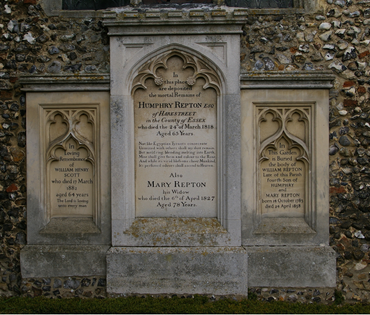 Pews were removed from the South Aisle and from the front of the nave where a dais was built to accommodate the lower altar table. The current heating and sound system were added and a lighting system which included award winning fluorescent tubes in the nave. This system has since been replaced.

Major fund-raising activities including the introduction of the 'Monday Market' in the church have enabled us to dramatically change the appearance of parts of the church. The West end floor has been raised to enable a level access from both the doors, with a ramp curving down to the Nave. A small kitchen, servery and disabled toilet have been added and the new children's corner has replaced the marble Jermy tomb which was moved to the Nave.
The pews were removed from the North aisle and the North Transept was cleared to make open spaces for exhibitions and worship groups. A new computerised lighting system which includes 18 chandeliers and targeted spot lighting has recently enhanced the atmosphere of the building. 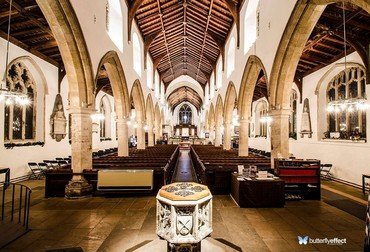 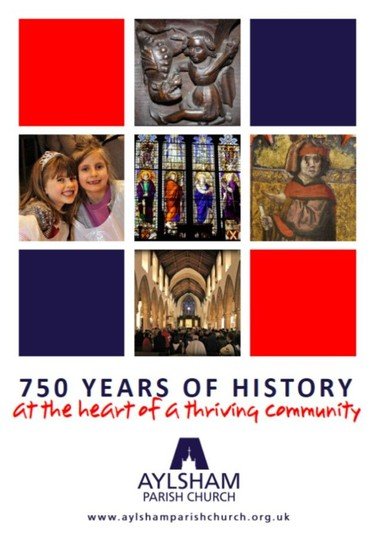 If you are looking for information on family history you can find out more by checking out the links below. 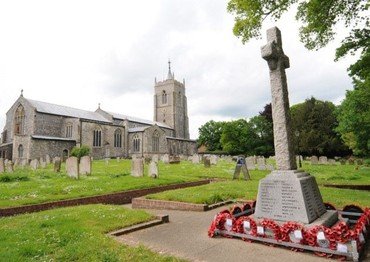 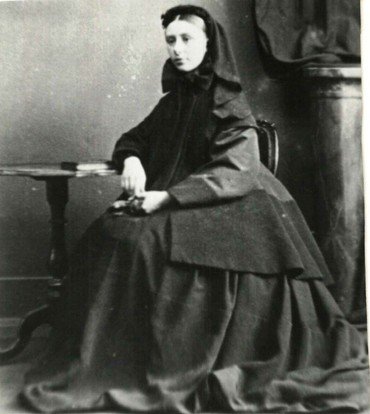 Find out more about her Blue Plaque at Aylsham Parish Church

History, 360 Virtual Tour, Calendar, and more on the go with the Aylsham Church App.

Download the app from the app store for free.